Close We use cookies to improve your shopping experience. To give your consent, carry on shopping, or change your cookie preferences here.
JANUARY SALE!!! HURRY, WHILE STOCKS LAST!
ends in
0 Hours
0 Mins
0 Secs

Although The Perrin & Rowe Filtration collection may be a relatively new arrival in the filtration market, the technology behind our product derives from “The Triflow”, the world's first three way tap, delivering not only hot and cold water but also filtered water through a dedicated waterway. A system that ensures the filtered water is not cross-contaminated by the standard mains hot and cold water. It incorporates the highest standard Swiss made ceramic filter which significantly reduces harmful substances such as chemical and biological contaminates as well as the most heavy metals and particles as small as 0.2 microns, while leaving untouched beneficial minerals such as fluoride, magnesium and calcium.

The Ceramic filter incorporated in the Triflow system is the highest performing filters available in the market today and is made by Swiss manufacturer Katadyn. The cartridge is made from sintered diatomaceous earth and has a micro porous structure impregnated with silver which is known for its bactericidal action. The porous structure is able to eliminate particles down to 0.2 micron (0.0002mm) in size. One pound of carbon contains a surface area of roughly 125 acres and can absorb literally thousands of different chemicals. Activated carbon is carbon which has a slight electro-positive charge added to it, making it even more effective in eliminating chemicals and impurities. As the water passes over the positively charged carbon surface, the negative ions of the contaminants are drawn to the surface of the carbon granules. The unique four stage filteration system is rigorously tested and developed. 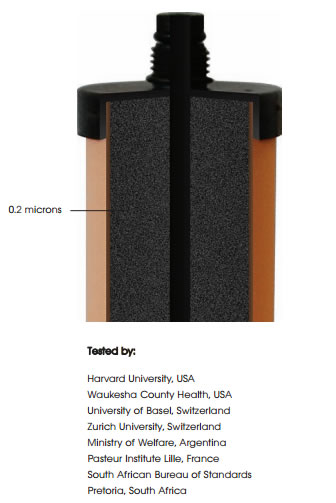